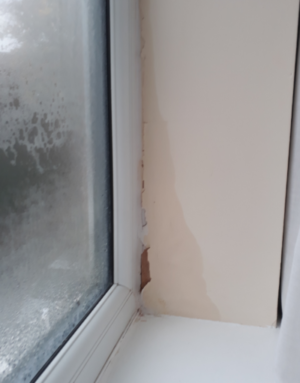 As autumn and winter approaches, we often find that we get reports of mould and damp patches. Often, we find this is condensation, but we know it’s often one of the hardest things to convince the resident that the mould/damp could be caused by their activities.

Condensation is when the air in the apartment has water in it. You can’t see it, but where is all that steam from the shower or cooking going? It is held in the air until the air touches something cold, like a window. The cold effect of the window on the air will make the air release the water and form condensation on the window. The water in the air is always looking for a cold surface to transform back into actual water.

As an example, if your bed is up against a wall, the section of wall behind the bed will be colder than the rest of the room as the hot air doesn’t go there. This will give a cool section where the water in the air will transform back into moisture. This is why mould often forms behind beds, cupboards, etc.

You need air circulation. If you open a window slightly the air inside the flat (which has high quantities of moisture in it) escapes and is replaced with new fresh air.

Here are some tips to help reduce condensation:

– Make sure your tumble dryer is vented correctly.

– If you are drying clothes inside, remember the moisture in the clothes is entering the air in your apartment. It doesn’t disappear. Try drying them in the bathroom with the extractor fan on.

– Cooking creates a load of steam, you’ll see it coming off every pan. Make sure your extractor hood is working correctly. It may be on, but are the filters blocked?

– Leave the extractor hood on for 15 minutes after you stop cooking.

– Similar to cooking, showers produce vast amounts of steam. Keep the bathroom door closed and have the extractor on. This will keep the steam in one place.

– Don’t overfill wardrobes or cupboards. Mould will form where air doesn’t move. You need air to be able to circulate.

– When possible open the windows and allow fresh air in. We know in the midst of winter this is not what you want to do. Often windows have small vents in the tops (trickle vents) – use these in cold periods.

– If you have air extraction systems use them. You need air circulation.

Mould can be caused by water leaks but 95% of the time the steps above cure the problem without further intervention.