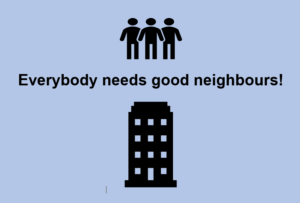 Living in an apartment block is not the same as living in a house. It is communal living and as such, it is important to be considerate of your neighbours. It’s also easy to forget that neighbours are above and below us as well as next to us in apartments.

Keep noise down. If you are having a gathering, do the decent thing and let your neighbours know beforehand and be reasonable about the end time. If you are reasonable, hopefully your neighbours will do the same for you. You might even get an occasional invite to a party next door! There’s no bigger downer on a party than an annoyed neighbour banging on your front door.

If you have problems with your neighbours do try and talk to them. We are often approached by residents asking us to speak to their neighbour about noise when they haven’t. Whilst we never tell anyone who has complained, you often don’t need much thought to work it out. There’s no quicker way to destroy neighbourly friendships than for someone to think their neighbour has been complaining about them. So, knock on and have a chat and explain the problem. Try and sort things out in a civil manner so they don’t escalate – be friendly. Equally, if you get a knock on your door then the same applies. Do your best to stay on good terms with your neighbours as you have to live next door to them after the complaint.

That said, if you’re not getting anywhere then please contact us.

Did you know in the lease for your apartment (the Land Registry lease) there is a list of all the things you can and can’t do? You can also find this information in your MyRevolution account. This will include things like not putting items in communal areas, as an example. It’s really important that you or your tenants have this list of rules as you can be held accountable to them.

Parking causes so much trouble. We don’t want to use ticketing companies, but often if we don’t people just abuse each other’s spaces. A bit of neighbourly thought would make ticketing companies obsolete. Always obey parking rules, and if you’re friendly with your neighbours you might be able to borrow their parking space occasionally.

Lend a hand – if your neighbour is carrying some shopping, offer to help.

What we’re trying to say is, the world can be a much better place if we do an occasional nice gesture. How we interact with each other will also frame the interaction back. If you bang on your neighbour’s door swearing and cursing then you’re likely to get the same back and this will then continue. A little forward thinking or simply thinking “how would I like that” will make us all better neighbours.